I know I promised to update monthly but....

If I  have any followers left out there after my protracted absence, I apologize sincerely.  It has been a very rough few months.  On Memorial Day weekend, I began to have dizzy spells.  They continued for months.  Spent a lot of time with a wonderful ENT - ultimately it was decided that they may have been caused by a sinus infection complicated by allergies - After a balloon rhinoplasty which was about as unpleasant as it sounds, no better.  Then Dr injected cortisone into both sides of my face just in front of the ears - To quote Seinfeld - Me - Will this hurt?  Dr. - Yes, very much.  But within a week the dizzy spells were gone and have stayed gone.  Fingers crossed.

Then I developed a number of ulcers, one of which was a bleeder.  Underwent an endoscopy with cauterization of the bleeder and have made a full recovery, thank goodness.  Dr says in no uncertain terms it was caused by years of use of Ibuprofen, so be warned, please.  The worst part of that was no alcohol for 5 weeks.  Back to drinking hooray.  Had no appetite and a frightening amount of weight loss but the good news is I am packing on the pounds again although my husband says enough already.  He prefers the new skinnier me.

I think that is all the bad health news.

I have been laboring over a new book called A Labyrinth of Lies which features new characters and will definitely be a stand alone book - no sequels.  But I was so focused on my health issues that I have not written in several months.

Rather, I have discovered the Harry Hole mystery series written by the Norwegian author Jo Nesbo.  Highly recommend them.  They completely distracted me from all of my problems but be warned, they are not for the faint of heart.  They have, however, given me a complex - I now find my books slow and  overwritten.  Oh, well, hope I get my inspiration back soon.

The other total distraction has to be the plethora of outstanding shows on Netflix and premium cable - On Netflix - check out The Fall with Gillian Anderson, Paranoia, Marcella and The Crown.  Oh, and River with Stellan Skarsgaard - simply great story telling with an unusual twist.

On Showtime - Ray Donovan is back, stronger and better than ever but completely heartbreaking.

On USA - Jessica Biehl hit a home run with an 8 part limited series called The Sinner.

Then of course, there was season two of Animal Kingdom - with the incredible Ellen Barkin and a cast of the hottest guys anywhere.

At the movie theaters - only one real standout for us all summer and that is Wind River.

Re concerts - saw UB40 in June - still amazing - Rat in Mi Kitchen - are you feeling Irae?

In July - Bryan Ferry at the Hollywood Bowl with the L A Philharmonic - okay, I'm in love.  Best concert ever.

Tomorrow night, back to the Hollywood Bowl for Tom Petty and the Heartbreakers once again.  Always the greatest.

And in October - Depeche Mode at the Santa Barbara Bowl.

It's been an awesome summer for music here.

Then there is our wonderful family of furry critters - we are down to 3 horses, 3 cats, 2 dogs and 2 bunnies - still a handful.  And by the way, bunnies are the best little furries in the world.  I do most of my writing with them next to me-.  The are endlessly lovable.

So you can see, with all of these distractions, it has been impossible trying to write.

In closing, rediscovered a wonderful old song from my youth  - check out He's So Fine by the Chiffons.  Can't stop singing.

Including a potential cover for the new book since I needed a photo of some sort.  The photo is of L.A.'s iconic Watts Towers - you have to see then in person to understand their power and beauty.  And the story behind them is amazing.

Hugs to anyone still out there.  I'm here. 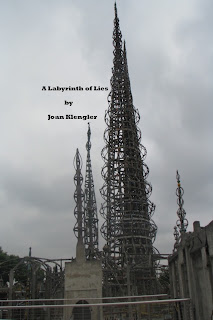