Good Intentions Undone or Why I have not done my promised weekly posts. 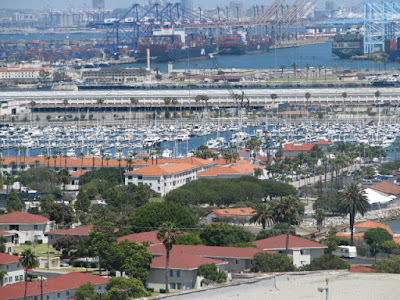 I love San Pedro.  It's not a typical southern California beach town and maybe that's part of its charm.

It's a working class town, home to Port of Los Angeles, and you can't get any closer to Catalina Island without getting your feet wet.

It's a place to eat fish on the wharf with the tourists at Ports O Call Village, a place for pizza (it has the largest Italian population in L.A. County), home to wind surfers and hang gliders, bikers and beach goers.  It is the setting for my newest book - The San Pedro Blues.

The book is finished but the thankless task of editing is still ahead.  Here's a taste:

Prologue
There are no good places to die a violent death, but in the scheme of things, a cargo container is probably one of the worst.

Within a day of being crowded into the airless metal box, Anichka has to force herself not to gag at the stench of unwashed bodies including her own, the reeking chemical toilet, the puddles of vomit from girls unable to withstand the pitch and roll of the freighter. Anichka knows that, unlike cruise ships, there are no stabilizers on freighters.

There is bottled water but no refrigerator, so the water is warm and tastes of plastic.
The man who lured them onto this voyage through hell with stories of the paradise awaiting them provides food twice a day. It is mostly edible. Anichka doubts that this is due to the goodness of his heart. He simply does not want them to arrive too emaciated to appeal to the men who are waiting for new young bodies to ravish.

‘Imagine if you can’ she wants to tell this man who pretends to be their savior ‘how truly terrible my life is if I am willing to leave it to be a whore.’

Unlike her fellow travelers, Anichka never for a minute believes that they are intended to be anything but whores once they reach paradise. There have been promises of freedom once they work off the cost of their passage but it is more likely that, by the time that happens, they will be too used up for anything but the streets. Once they realize what they’ve signed up for, some of them will choose
suicide. The ones that survive will turn to drugs to soften the sharp edges of their reality.

But she is smarter than the others. She will not be a whore for very long. She has a plan. And if she finds a way to cut the throat of this man before she gets away, well, that will make her escape all the sweeter.

It is sometime in the early hours before dawn when their voyage ends. The man unlocks their prison and steps inside. He explains that they will be there for some time because certain paperwork must be completed. Anichka figures that what he really means is that bribes must be paid. In the meantime, he warns them that they must be very, very quiet. If they attract attention, officials may open the container for inspection and they will be arrested and sent back to Odessa.

Once everything is in order, the container will be lifted onto the back of a truck. The truck will drive out of the port to a place nearby. When they get to this place, he will be waiting and will take them to the lovely apartments where they will be living.

Anichka finds it difficult not to laugh out loud at the hopeful expressions on the faces of her fellow passengers. So naïve, so foolish.

After he leaves, they whisper to each other about how good it will be to walk on land again, to bathe, to sleep in a bed. There will be beds alright but Anichka knows none of them will be doing too much sleeping in those beds.

Only muffled sounds penetrate the container’s walls. Time passes, impossible to know how much time, but at last there are a series of loud noises and then the container is moving, swaying.

A few of the girls giggle nervously, others look frightened. Anichka comes from a seaport so she has seen cargo containers lifted by monster cranes from the decks of freighters and set down on flatbed trucks.

The truck begins to move, but soon stops. Anichka knows they are passing through a security checkpoint. There is a remote possibility that the container will be opened for inspection before it is allowed to leave the port. If that happens, she counts on the panic reaction of the other girls to provide enough of a distraction to allow her to make a run for it. Her chances of actually getting away are slim to none, but she’d be a fool not to try.

But there is no inspection. The truck begins to move. Anichka is nothing if not flexible. If one plan does not work, another will. The important thing is to have a backup strategy.

When the truck stops again, she knows they have reached the place where they will be transferred to vehicles that will take them to their final destination. It is another chance, most likely her last, to get away.

The container is lifted into the air once again. It swings wildly and hits the ground with enough force to cause the girls who are standing to fall. They rise quickly and gather near the door.

Anichka keeps to the shadowy back wall of the container. She sits on the floor pressing her back against the cold metal while the rest of them crowd forward, anxious to breathe fresh air, as though it will be only minutes before they are released.

But it is not minutes. It seems that hours pass. It is hot, hellishly hot. Anichka can sense panic setting in as the girls begin to believe that they have been forgotten, left to suffocate or starve.

When panic reaches its peak, they will begin to scream. Anichka wonders if anyone will hear them.
Then there is a sound, the sound of the container door being unlocked. The idiots, of course, crowd around the opening, ready to welcome their redeemer.

A man is silhouetted in the opening. All she knows of him is that he is not the man who brought them here. This man is much bigger. He is carrying something. He raises his arm and the first girl crumples.

The rest of them fall back, but they are all tangled together, trying to scramble out of his reach, tumbling over each other like rag dolls. The only light is provided by a pair of battery operated
lanterns that fail to illuminate the far corners of the interior. It may be one of the reasons why Anichka is the only survivor of the slaughter.

But she knows that the real reason is not the poor light. Rather, it is how quickly she is able to burrow under the bodies of the girls who have fallen near her. Their blood runs over her, warm and viscous. Some of it enters her mouth. She swallows it to avoid choking. She holds her breath and pretends to be as dead as the rest of them.

She remains there for hours, waiting, sure that the man will return for her.

At last, the door opens and a voice says, “Holy Mother of God.”

Posted by delta mystery writer at 10:55 AM