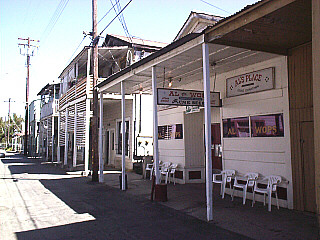 What does Al the Wop's have to do with how music influences a writer?  Absolutely nothing.

However, every time I think of Al the Wop's, I hear George Michael singing Father Figure.  If you read In The Delta, you'll know why.

Because I see a movie playing in my head, scene by scene, as I write, there is usually a soundtrack playing.

Sometimes, a particular song will inspire a scene. Other times, I will write a scene and reference an actual song as I did with Father Figure.

When Nick is walking along Lost Slough after fishing, I hear Born on the Bayou by Creedence Clearwater.

When Nick and Jessie marry in On Sutter Island, Los Lobos' Kiko and the Lavender Moon is the song they dance to at their reception.

In the Meadows, there are references to Dylan and to The Grateful Dead - a nod to Nick's parents who were college student protesters.  And so, Jessie sings Althea to her babies as a lullaby and Grace tries to teach Jessie the words to Subterranean Homesick Blues.

Moving along to the L.A. Mysteries - there are plenty of references to Katie's love for 80's dance music particularly Fine Young Cannibals Good Thing,  Dead or Alive's You Spin Me Right Round, Wang Chung's Lullaby and the music of one of my favorite bands - Depeche Mode.

The music of Leonard Cohen makes several appearances.  His song Darkness inspired the title and There For You caused me to completely rewrite the portion of Darkness dealing with the characters Bobby Lento and Jordan Lilly.

Tom Waits Virginia Avenue was the inspiration for what I hope is a memorable strip tease featuring Katie in A Blood Red Sky.

Since Maggie Ryan spans decades - the music changes with the times - early on, it's all fifties greats like Till I Kissed You by The Everly Brothers and Don't by Elvis.
When Maggie returns to school, there is Hendrix, The Grateful Dead, Crosby Stills and Nash and one of my all time guilty favorites In A Gadda Da Vida.

When Maggie visits Jamaica, I place her dancing in the crew bar of a cruise ship to Johnny B Goode - but not the Chuck Berry version - although she references it - but the version by the incomparable Peter Tosh.

Neil Diamond's classic songs are the background for Maggie and Joseph's love for each other - Holly Holy for the scene in which Joseph teaches Maggie to canter her horse, Play Me for the night that Maggie first comes to Joseph's bed, Stones for the years that Maggie is separated from him.

I can't forget Gordon Lightfoot - I see The Wreck of the Edmond Fitzgerald as the title music.  But to this day, I cannot listen to The Last Time I Saw Her - it's beautiful but reminds me that there was a time when I intended to write a death scene for Joseph.  (Couldn't do it)

There's not a lot of music in 17 Days but Cherish by The Association figures in one scene along the river and a whole medley of Elvis by an Elvis impersonator at the Avi Casino. I Saw the Light plays through the final night and morning between Kimmy and Matthew.

The first book in a new series - The Two Way Shake - has, as far as I can recall, only one musical interlude - a dance in a seedy bar - set to the tune of Tom Waits' Walkin' Spanish but the entire story was inspired by music from Mark Knopfler's new CD Tracker in particular Long Cool Girl, Lights o f Taormina and Mighty Man.

Finally - we come to the book I am currently writing - The San Pedro Blues - not much musical inspiration so far - although Allison Krause's I Believe in You is behind the relationship of Katie and Nicco - don't ask, read the book.

If you are a writer, and music inspires you, I'd love to hear your thoughts on the topic.  Write me at joanklengler@gmail.com.  Till next time, thank you for reading.