I haven't done a give away for awhile now.  So for anyone interested who missed 17 Days the first time around, you can download free from Friday May 10 through Tuesday May 14.

When she heard his footsteps on the stairs, she lowered herself to the floor and crawled under the bed.  He found her, of course, and dragged her out by her ankles.  When she tried to hold onto the bedpost, he kicked her wrist until she had to let go.

Matthew - He pulled a big suitcase down from a closet shelf and threw her clothes into it, as much as would fit.  Then he dragged it and her to the front door.  He threw the suitcase onto the porch and pushed her out after it.  He closed his ears to her pleas, locked the door and when she called out from the other side, he answered coldly “Go somewhere they care”.

!7 Days is a road movie but the road is a river and each day of the journey brings a new encounter: with Bikers and Deadheads, an Elvis impersonator and a wild pig, a man who fell in love with his own wife, and Paco and his Coyotes, among others.  All have their own small stories filled with love and laughter, tears, and adventure, stories that carry the reader along as surely as the river's current and the winds that echo off the canyon walls.

Kimmy and Matthew are people profoundly damaged by their pasts, coming to know and to love each other as they share a canoe and try to live a lifetime in just a few days.  The two become three when they rescue the little dog Tachi, an act that leads to a confrontation with a trio of deadly Asians.

The half Maori Kimmy, a free spirit whose mother taught her that she is a warrior and the Lakota Matthew who learns from her to let go of his pain and live again could never have known how far the river would take them in 17 Days. 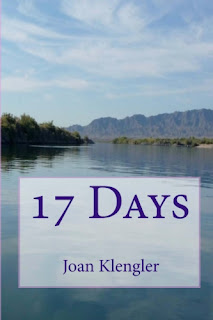 Posted by delta mystery writer at 7:39 AM